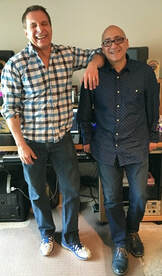 This concert features Jud Friedman and Allan Rich, who wrote hits such as
“I Don’t Have The Heart” for (the late) James Ingram, “For the First Time” (Kenny Loggins),
and “Run To You” for Whitney Houston on “The Bodyguard” soundtrack.
Each or together, they’ve had other hits and cuts by NSYNC, Ray Charles, Tina Turner,
Barbra Streisand, and many more.
Jud and Allan recently celebrated 25 years of writing together and were honored at the Grammy Museum in L.A.
They are 6-time-nominated Oscar, Golden Globe, and Grammy award songwriters.
Jud and Allan put on a great show telling the hilarious and poignant stories of how their songs came to be.
If you are a songwriter, or appreciate those who create the soundtracks of our lives,
don’t miss this event!
Marty Panzer - November 10, 2018
Hit Songwriter and Lyricist Marty Panzer, who wrote many hits and cuts with his international superstar friend and long-time collaborator, Barry Manilow, with be headlining the Nov. 10 show. Marty also currently pens music for Disney, including the popular "Disney Princess Songs" series. He will be telling his hilarious stories about his hit songs and the famous voices that sing them.  Since Marty does not sing or play an instrument, featured performers will be: Cantor Lori W. Frank, Jim Boydston, Matt Ignacio, Juliet Lyons, Shaine Ingamells, with Piano Accompaniment by Tracey J. Marino.
Jack Tempchin - April 21, 2018
It was another sold-out show with Hit Songwriter, Singer, Guitarist Jack Tempchin.  Jack wrote many hits and cuts for The Eagles as well as with and for his good friend, the late, great Glenn Frey.  Two autographed bottles of Jack's "Peaceful, Easy Feeling" Wine were raffled off .  Jack's long-time manager Bradshaw Lambert and Barnes & Nobel rep David McMeekin were there to help with the CDs and merchandise.
​The Moderator was Vance Marino.
Steve Dorff - February 3, 2018
Hit Songwriter, Singer, Pianist Steve Dorff was the inaugural performer for a sold-out show.  Steve also signed copies of his new book, "I Wrote That One, Too...A Life in Songwriting from Willie to Whitney."  Barnes & Nobel representative David McMeekin was there to help with book and CD sales.
​
The "Singer Songwriter Events" Logo Designed by Chris Armes
Website: ​www.SingerSongwriterEvents.com designed and managed by Jeff Lizerbram
To  CONTACT
Click HERE
© 1991-2023 Tracey Marino and Vance Marino
SongMaker Productions™
​All material copyrighted or used with permission.  All rights reserved.