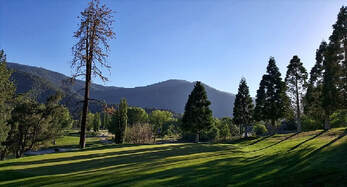 Sept. 6-8, 2019: Tracey & Vance were Mentors and Guest Speakers at the 2nd Annual Pine Mountain Club Songwriting Festival, hosted by Ronan Chris Murphy and Liz Redwing. The festival was a gathering of songwriters to learn, collaborate and perform live, in Pine Mountain Club, CA, which is a beautiful mountain town located in the Los Padres National Forest north of Los Angeles. The festival featured workshops for beginner to advanced songwriters from world class mentors, as well as live performances Friday night, with a special concert of headliners (Michelle Shocked, Shelly Peiken, and many more) taking place Saturday night. For more info  click  HERE 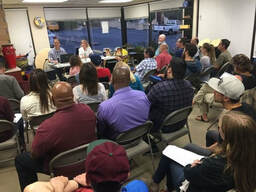 May 16, 2018:  We had a great turnout - more than 30 people were there and shared some wonderful songs and instrumentals. We were the Guest Speakers for the San Diego Songwriters Meetup on Wednesday, May 16, 2018, in Sorrento Valley, San Diego. The topic was "Extracting The DNA From Marketable Music" hosted by Cliff Keller.

February 3, 2018: It took YEARS in the making!  But we finally had our new Legacy Hit Songwriter Concert & Story Telling Series, "I Write The Songs," with inaugural guest performer Steve Dorff (“I Cross My Heart” by George Strait, “Every Which Way but Loose by Eddie Rabbitt,” “Through the Years,” by Kenny Rogers and “I Just Fall In Love Again by Anne Murray.”). Steve sang and played the piano, and entertained the audience with stories of how his songs came to be.  He stayed to sign copies of his new book "I Wrote That One, Too... A Life In Songwriting From Willie To Whitney"  Hit Songwriter Jack Tempchin, who wrote hits for Johnny Rivers ("Slow Dancing"), Glenn Frey ("Smuggler's Blues," "You Belong To The City," etc.), and the Eagles ("Already Gone," "The Girl From Yesterday," etc.), is on board to perform at the next concert on April 21, 2018 in honor of the 45th anniversary of his hit song "Peaceful, Easy Feeling" featuring his new wine.
January & February 2018: Steve Barden's book Writing Production Music For TV: The Road To Success" is a best seller on Amazon -- and it sold out -- twice! Steve used several of our quotes throughout the book.

January 2018: "Organic Sweets" is officially up and running on the APM website.  Working on Vol. 2...

December 2017: After 10 years of networking, following up, meeting collaborators, our Indie Acoustic Pop Song collection "Organic Sweets," a 12-song collaboration with nine up-and-coming artists and producers, is signed to the Mark Award-winning Sonoton/APM "Surefire" Artist series and released in Germany.  Within a week of its release, several songs were placed in German TV shows.  After the release on the APM website in January, we got a placement on the Hallmark Channel with Steve Collom's song "When We Get Together." As of May 2018, 10 of the songs have been placed in TV shows, some almost daily.
​​November 2017: We were truly honored to offer our advice and quotes in the new, hot-off-the presses book Writing Production Music For TV: The Road To Success" by our dear friend of many years, Composer Steve Barden.  The book was published by Hal Leonard, and that's pretty impressive. 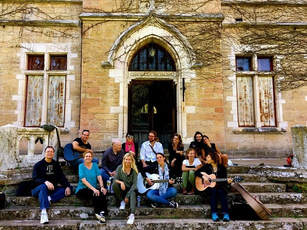 October 2017: We spent 12 days in France, four of which were spent writing songs at a castle in Mâcon with 12 other songwriters.  It was the trip of a lifetime, organized by their co-writers Ian McCartor and NSAI Malibu Coordinator Nitanee Paris Lawson.
June 2017: We are now on the SCL Song Arts Team Committee for the Sing Out events with Organizer Adryan Russ.  Other committee members include Patty Silversher, Michael Silversher, John DeFaria, Julia Othmer, Tyler Traband, Kole Hicks, Andrea Becker, Carla Patullo.  For more information about The SCL (The Society of Composers & Lyricists), click HERE

April 2017 - It was the best one ever.  The PMA Cocktail Party at the Cosmopolitan Chandelier Bar.  SESAC Cocktail Party at The Palazzo Lavo Bar. Killer Tracks party at The Foundation Room at Mandalay Bay.  Hanging with PRO Reps.  Dinners with composer and songwriting friends.  Talking shop with other techy nerds and the Avid people.  Staying at the Wynn Resort and indulging in the fabulous buffet.  Meeting and reconnecting with publishers. It goes by too fast every year!

March 15, 2017: Song Soldier Podcast - Our co-writer Ian McCartor interviewed us as part of his on-going podcast series. He asked us about the music industry and how we got started. Click HERE
​

October 2016: Vance Marino was a panelist at the Production Music Conference in Santa Monica, along with Elisabeth Oei from Sonoton / APM.  Vance represented the SCL, Society of Composers & Lyricists.  The Moderator was Benoit Grey. 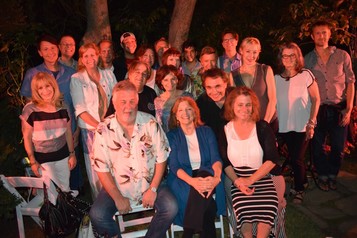 September 2016 The inaugural SCL Sing Out event was held in Glendale with Music Supervisor JOHN HOULIHAN and Music Licensing Agent BETH WERNICK of Imaginary Friends Music Partners.  Our song was one of 12 chosen out of 60 entries. The event was held at Patty Silversher's house in Los Angeles.  (Seated left to right: SCL President ASHLEY IRWIN, Sing Out! Organizer ADRYAN RUSS, Host PATTY SILVERSHER).  We were fortunate to sign some songs with Imaginary Friends Music Partners because of this event.
To  CONTACT
Click HERE
© 1991-2022 Tracey Marino and Vance Marino
SongMaker Productions™
​All material copyrighted or used with permission.  All rights reserved.